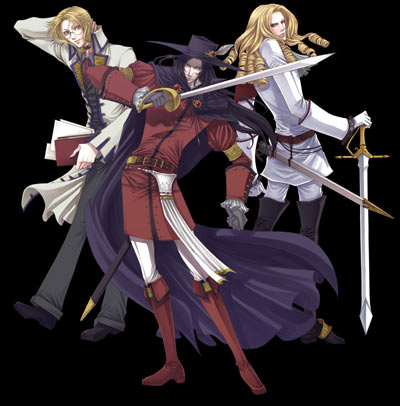 This is my Animamundi Shrine/fanpage!

Recently(as of July 2019) I played the BL(-kei) visual novel Animamundi, created by Karin Entertainment, and localised in English by Hirameki International(R.I.P.)!

This page has autoplay music! The song is from the official Animamundi soundtrack!

Animamundi takes strong references from works like Goethe's Faust, and Dante's Divine Comedy. Perhaps obvious from those two works, it also has strong religious (Christian) themes. And this is just my theory but I think it also takes inspiration from classic shoujo manga to an extend. It just has that kinda feel to it. And maybe it's made a bit obvious by who they cast to do narration for the game.

Animamundi is a story about a man named Georik who's only living relative, his little sister Lilith met a tragic fate, and he does everything in his power to protect her and reverse her fate.

Most of the game's length is spent in Hardland's capital city of Kamazene in Animamundi's fictional world. Because of how Hardland is and its rules and stuff it's kinda easy to forget that Animamundi's world is actually really high fantasy with stuff like monsters, dragons, elves, even dwarves! Sadly you never really get to see any of the monsters or dwarves. Hardland seems like it's pretty much just populated by regular humans and because of how well defended Kamazene is from monsters you never really get to see much of the high fantasy stuff but I think it's real cool knowing that stuff's there. There's also futuristic robots and junk thanks to Hardland's scientific advancements. It's pretty rad.

There's also a lot of stuff about alchemy and it actually shows practices that were done in real life way back when! It's so cool learning the stuff that fricking Full Metal Alchemist never taught me. The game has an amazing (mostly) all-star cast! Everyone did an amazing job in it. I particularly enjoyed Koyasu Takehito as Bruno. I touched on it a tiny bit above, but the person who did narration for the game is Motoyama Kakuko!! She seems to be mainly a live action actress, and only has one notable credit in anime-related stuff. But that credit is having done the narration for the Rose of Versallies anime adaptation. I still can't believe Karin got the narrator of Rose of Versallies to come and narrate their little gay game.

It's a BL(?) game but there isn't really much romance at all in it. It's really just a plot-based visual novel that happens to have a few parts that are a bit gay. On the official Japanese website it's referred to as a BL-kei gothic horror adventure game.

The big main true route/ending was so FRICKING cool I don't want to spoil anything but it's my favorite.

I'm not really into BL much at all anymore, partially because I was sick of all the genre's really repetitive tropes I don't like, and partially because I just grew out of it. Animamundi is just such a great story and has so much that I like in it, and it successfully avoids like all of the tropes I dislike about some BL.

Also the opening is so good. It's actually what convinced me to finally play the game, I couldn't stop listening to it! Here's an embed video of the full opening. Big warning for heavy CG spoilers and vague major spoilers from those CGs!


So in conclusion, Please play Animamundi!!!!!!!!!!!!!
I dunno if you can legally buy the localisation anymore since the company that did it is dead(or at least just not doing VN localisation anymore) but you can definitely track down a download for it. I did.
I feel like I haven't said enough about this game despite how much I love it! I might come back and add more to this page later...

Also I followed the game's character designer on Twitter and she followed me back and even liked some of my Animamundi related tweets I had an aneurysm.
Links!!!
Links to pages/resources related to Animamundi!

English popularity poll page! (archive) (no results but has dumb alternate descriptions of the characters)

Darkness Eternal - Animamundi fansite! (for even more links check out their links section!)

VNDB page!
Gifs!!!
Here's some gifs I found on Gifcities that I think (at least partially) fit the aesthetic of the game. I may add more here in the future!